After a busy and then not so busy weekend, following a balls out busy week, life is returning to some sort of normalcy – if there is such a thing. This basically means I should be seeing a return to routine, which I’m looking forward to (and then no doubt will eventually tired of after a few weeks). Sadly this comes at the loss of my brother Jonathan who has returned to English shores to continue his abnormal normalcy.

I’m expecting with this return of routine to also come the return of daily writing (as writing is included into the routine I think it’s a pretty strong hypothesis). In fact it’s already off to a good start. Apart from me currently writing the words you’re currently reading I also managed to get myself out of bed at six this morning to work on my script before work. Much like these diary entries my script writing had taken a hit during the week of work/social activity/sleep/repeat, and I’m glad to be once more making characters say and do things on a page.

I’m a big fan of trying to slip in a bit of writing before work. Not so much because I’m producing copious amounts of writing – I’m definitely not, half an hour to forty five minutes of writing might get me two pages at best – but that half an hour kicks starts my brain into thinking about the next elements of my story throughout the day. It’s the same logic behind eating breakfast, even if you don’t have a huge amount to eat in the morning it’s always a good idea because it kicks off digestion and gets the whole system started. If I’m lucky that half an hour will power up the subconscious part of my brain designed for story development; where it will masticate, break down, and spew thought provoking and discriminatory brain acids over the new bits and pieces I’ve given it and, after eliminating the waste (i.e. crap ideas), hopefully alert my conscious brain at some point with something I can use. The basic process of coming to an epiphany.

Anyway I promised the other day to share some cool writing links and I mean to do just that.

Both of these have come from Warren Ellis’ newsletter which I’m unashamedly trying to emulate with these diary entries, so if you want to see a more well written version of this kind of thing you should check it out.

+ The little chart you see below comes from the troubled and genius mind of Dan Harmon, who you might know as the creator of TV shows Community and Rick and Morty. It’s a simple but incredibly useful piece of story structure that boils down a character’s arc throughout an episode. It’s similar to the famous Hero’s Journey but perhaps more useful in terms of the characters wants and therefore motivations. 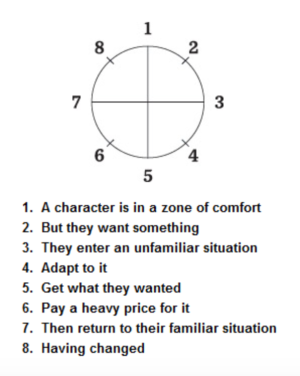 + We’ll stick with story structure for our second link which talks about The Levitz Paradigm, which is a plot structure device that’s been used for ongoing comic series for years. You can read a good run down of it here.

But I’ll add a quick quote so you can get the basic idea:

“Basically, the procedure is this: The writer has two, three, or even four plots going at once. The main plot—call it Plot A—occupies most of the pages and the characters’ energies. The secondary plot—Plot B—functions as a subplot. Plot C and Plot D, if any, are given minimum space and attention—a few panels. As Plot A concludes, Plot B is “promoted”; it becomes Plot A, and Plot C becomes Plot B, and so forth. Thus, there is a constant upward plot progression; each plot develops in interest and complexity as the year’s issues appear.”