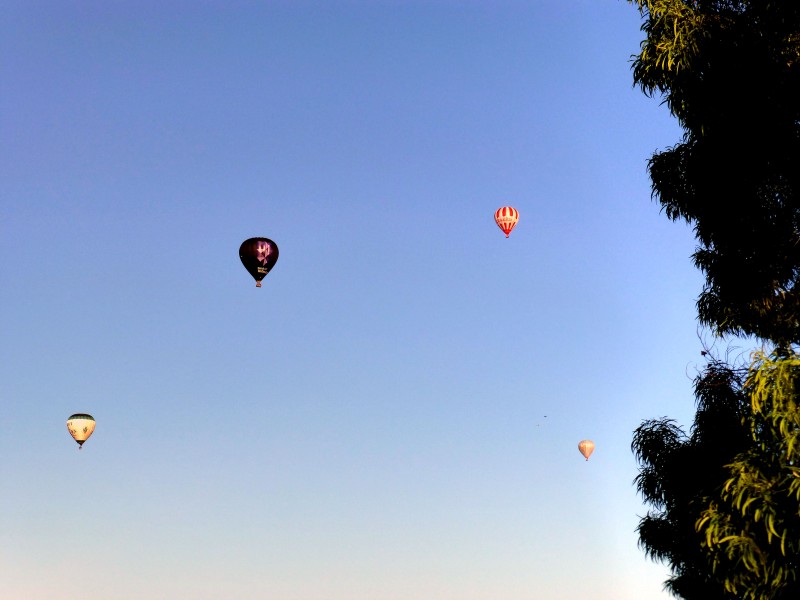 While sitting at my kitchen table this morning I saw a bunch of balloons rising up in the sky. Usually I sit on the other side of the table but, as the Lady Holly had been doing some work there, sat on the window facing side to complete my morning writing session for NaNoWriMo (National Novel Writing Month). Call it serendipity but this move allowed me to see the flock of hot air balloons you can see in the photo above glide past my window which I would have otherwise missed. I got very excited by seeing this and raced to get my camera. I flew out into the back yard and climbed to the top of our very high soundproof fence (as our backyard backs onto a highway) and started snapping some shots. Satisfied that I had captured the moment I went back to the house to realise that in my hurry I had locked myself out. Damn you NaNoWriMo.

NaNoWriMo is also the reason I haven’t blogged recently. Quickly, for any who don’t know, NaNoWriMo is a challenge put forth to writers to complete an entire first draft of a novel of fifty thousand plus words during the month of November. As you can imagine it’s taking up a lot of my time, a lot of my thoughts, and a lot of my writing juices. To complete the challenge I need to write at least 1,667 words on average per day. At the moment I have an average of 2,500. Which means despite only being a third of the way through the month I’m already half way through the required word limit at 25,000 words. Or to be more accurate I’m currently sitting on 27,512 words as I’ve already completed my 2,500 self imposed daily word limit. As you can probably tell I’m pretty pleased with myself.

It’s weird to have written so much in ten days. It took me months to finalise a 17,500 word novelette, yet I smashed through that amount in just a week. As you would expect, while the quantity of the writing is high the quality isn’t. To be able to complete that much writing I really don’t have the time or the energy to actually make sure the 2,500 words I’m writing every day are of a standard. It’s been interesting, sometimes excruciating, and oddly liberating. The first couple of days I hated it, especially day one.

I was writing in my normal way, which involves some self editing as I go and a certain amount of planning to know just where the story is going. While I had done some planning prior to the start of November for the idea I’m working on I quickly realised just how little content that planning would produce. The speed to which I was burning through content meant I used up my first initial plot points during day one. I have some strong ideas about how to finish the story and few ones along the way but there’s a lot that need to happen between then and now and that stuff has to happen at a rate of 2,500 words a day. Because of this I was forced to go into full discovery writing mode. I’d sit at my laptop or work computer with the barest minimum idea of what’s going to happen next, a little unsure where to even start. Like I said, for the first few days this was a mild form of torture and getting to the word limit hurt. Then somewhere in there something changed. Maybe it was that my standard-of-writing-dam-wall broke, or maybe it was my writing muscles getting stronger, but either way I stopped caring that my writing was an average pretty shitty and just wrote. Before starting this I knew that my quality of writing would drop, but I think for those first few days I was still rallying against it despite this knowledge. Once I accepted it was like a switch had been flicked. Since then it’s honestly been kind of amazing. 2,500 words a day no longer seems intimidating or impossible but rather very achievable. The other day I got up early and finished off my 2,500 words before work! The writing’s not great, like, really not great, but I’m learning how little that matters.

What I’ve written is messy and unstructured. It rambles and diverts away from the main storyline almost constantly but the places it goes to can be more interesting and surprising because of it. When I sit down to write I honestly have no idea what’s going to come out and sometimes what comes is garbage that I know I’m going to have to throw away later but sometimes it’s something really good, that fits in perfectly for the story, fleshing it out and enriching it in a way I never would have planned. The way I see it I’m writing draft zero, this is almost a research document, a way for me to discover all the parts of my story, work ideas through, and see what comes of them.

If I maintain the rate I’m going by the end of November I will have hit 75,000 words, which, even if I only keep a third of that, gives me a really great start on writing this novel.

Also me being locked out of the house turned out okay. I remembered we had a spare key, carefully hidden, and I was able to let myself in with no problem.

Turns out I never needed to worry.