Music today is from musically funny Englishman, Gavin Osborn. I saw him perform recently with stand up comedian Daniel Kitson and his music, apart from being humorous, proved to be lyrically sound and easy on the ears. This track, Albert Went Out to See Rock Bands, is the perfect combination of sweet and whimsical.

A little while ago I had a blog post about how I was thinking of digitally self publishing a novelette I wrote last year called The Case of Henry and the Hamster. The blog was all about the pros and cons of self publishing with the ultimate conclusion being that I should go for it.

Well, since then, things have taken an unexpected but welcome turn. After reading that blog the good guys known as Sean and Gabe both encouraged me to go one step further and create print versions of the story as well. And, well… 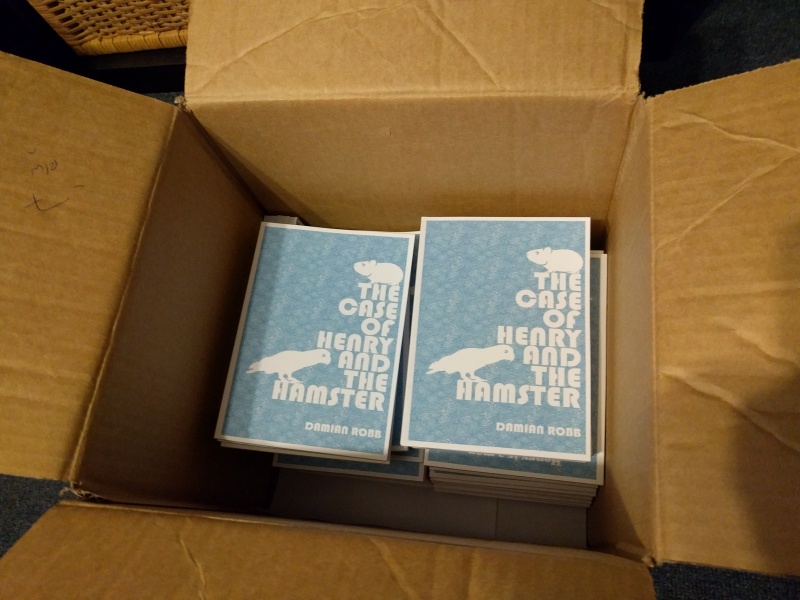 There’s a box of books in my bedroom. Gabe and Sean are two of the guys I podcast with and are both writers themselves. Sean, who recently had a play of his produced, had the bright idea to write a sequel to the play in the form of a novella, which he would get printed and sell at the showings. And so he did. He then had the idea (he has a lot of ideas) that we both sell our stories at the upcoming live show of our podcast, individually or in a hard to walk past discounted bundle. And so we did.

Then the other good guy, Gabe, also had an idea. He was going to be travelling to Sydney to do another live show and so offered to take a handful of our stories up there to sell as well. And so he did.

Now, don’t get me wrong, I haven’t sold many of the books, and most have been sold to people I know personally, but the fact that I’ve sold any is kind of amazing to me. Not because the story doesn’t warrant it, Henry and his Hamster are two of the favourite characters I’ve written, just because I figured I wouldn’t be able to sell words I wrote for some time yet. But that’s what happens when you have good friends and people that encourage you.

Here’s what comes next. Thanks to yet another good guy (I am literally plagued by them) this time by the name of Dan, Sean and I will have a ‘Book Launch’ for our two novellas. Dan owns a young writer’s studio  a space for kids to practice and learn creative writing outside of school, and he’s offered the space for the book launch. We have no hard date just yet, but once we do I’ll be sure to publish it here and on social media (that’s for you, Mum and Dad).

After that Dan has also offered to sell some of the books in his studio and I’ll also organise a link on this site where people can buy single prints or digital versions of the story.

I’m under no illusions that this will become anything more than what it already is, but even knowing that my words are on even just one person’s bookshelf, that the story that was in my head has now entered theirs through the magical process of writing and reading, feels like something. It feels good. It feels like a start.

In other news, I got a new job. I know, you’re impressed, and you’re right to be impressed, I’m very impressive. It’s still very much in the science field, which is what it is, however it’s situated a lot closer to home and, most importantly, only four days a week! How bloody good does that sound? Very bloody good if you ask me, and you did ask because I’m currently writing this to a hypothetical audience of my creation and so I’m saying you did.

The job is for the University of Melbourne, which is located in Carlton, only about a 25 minute ride from my house, opposed to my current hour and ten minute ride, and, here’s the real kicker, will pay me about the same as I’m currently earning despite being one fifth less days per week. I’m quietly very happy about that, and by quietly I mean writing it down and sharing it on the internet.

What will I do with my extra day per week? That one’s easy. Write. That’s ultimately what got me hunting for new work in the first place. I’m not yet at the point where I can throw off my more traditional job in order to try and write full time, quite far from if I’m being realistic, but I am in a position where I’m craving more time and flexibility to devote to writing. Hopefully this job will give me just that.

One step closer to the mountain.