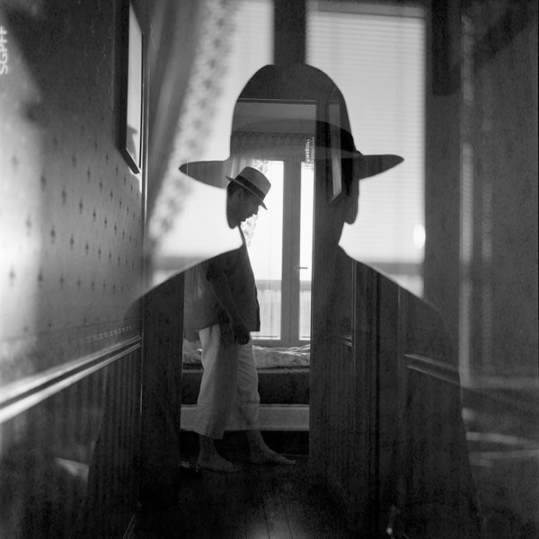 I write this in a dimly lit room, stark walls surround me, no windows. If my script is large or chaotic it is because I have left my glasses in the room next door. I allow not even a mug of water in my presence. I have discovered a myth, or something more, perhaps, and I do not want the subject of my study to see me; not yet.

Lost legends have him as the Chalk Man, less a name but a descriptor; given for his white and ashen skin. Which is wrong, as it’s not skin, but bone. Bone so old that it crumbles, leaving a fine powder of dust, akin to chalk dust, on whatever he touches. Man is also wrong, as he is of no gender, nor even human, but, for lack of appropriate terminology, we will use the pronouns referring to the masculine throughout this text.

The lost legends — that are now found, if only to myself — are, by a human understanding, ancient, as the Chalk Man hasn’t been spoken of, written of, or likely even thought of, for centuries. His existence slowly being lost from the collective consciousness one life at a time. By the Chalk Man’s point of view, however, they are practically modern, having been written within the last millenium.

His purpose, in those legends, is ill defined, if simply not mentioned at all, which is a shame because his purpose is a very important one, that contains many roles. He is a king to some, a servant to others, sometimes a friend, sometimes an enemy, an angel, or a demon. His job, as it were, is to appear as the honest reflection of us all. A confusing, if not mysterious, job description I am aware. Let me try and make more sense of it.

Have you ever caught your own reflection and for a moment thought someone else was looking back at you? Perhaps you saw a monster, or a stranger, or a royal, or a saint. Just for a second. That was the Chalk Man. Or at least, that is the Chalk Man at work, and he has been doing this work for a very long time.

It is presumed that the Chalk Man was present when we were still walking around on all fours. Indeed, it is likely he was there when our ameba ancestors were first beginning to divide. He watched us, they say, the legends that are both ancient and modern, from his reflective surfaces, waiting for the day when we would gain a level of sentience that could recognise our own image.

Some of the legends, that I have hunted down in hidden cities that no longer have names, argue that the Chalk Man did more than watch; that he, just once, stretched out a bony arm from his reflective kingdom and altered the course of man; that it is due to him that we are so different from the rest of the animals that we share this planet with. What it is the Chalk Man did to achieve this is not written, and so this theory is to be taken with a pinch of salt…or chalk dust, as it were.

The first recorded encounter with the Chalk Man came some time after, when one of the ancient civilisations, the residents of one of those cities without names, first started writing things down. One such text wrote of an encounter whereby a local woman went to drink from the underground river that fueled the city, peered into the inky water, and saw the Chalk Man staring back at her. The woman, a weaver by the name of Oma, cried out, but did not flee. Instead, once her breath and heart were once more under her control, she crawled back to look at the water. Once more she saw the Chalk Man, bony and white, her own reflection nowhere to be seen. He did naught but watch young Oma, who, after deeming him not a threat, went to gather others to show them the chalk figure in the water. By the time she brought the crowd to the water’s edge, he was gone; her own reflection returned to her. It would only be later, after multiple appearances, that Oma’s story would be believed.

The reason why the Chalk Man simply watched Oma, and especially why he watched her in his own form, has been much argued over the many years by the forgotten scholars that once studied the Chalk Man. Some claimed that by seeing the Chalk Man as he truly is allowed Oma some gaining of knowledge outside of our understanding, and caused some great shift in her life, and on mankind as a whole; and indeed Oma did go on to live a remarkable life. Some claimed that he fell in love with Oma, and stole her reflection for those few short minutes to take as his Queen, only to find a reflection was no substitute for the real thing; this too, may well be the case. For myself, I think the Chalk Man was simply studying, seeing some final aspect of mankind’s heart so he could then go on to do his true work.

The work, as one of the old texts described it, was: “Purveyor of understanding and dealer of truths”. This is the most accurate description I have found. Simply, the Chalk Man shows you what you need to see. If you be good, but lacking in courage, you may see yourself momentarily in a reflective surface as a hero. If you be evil, but lacking in morals, you may see yourself as a monster. You may see an angel when you need hope. You may see a devil when you need fear. You may see your mother when she needs you to visit. And on it goes. The Chalk Man knows what you need to see and shows it to you. Often, after a viewing, you may find some of his bone dust on a shoe, or you shirt. This is the way to know if was a true showing. Or, so the texts say.

One text, the latest I’ve found, goes one step further. It claims that behind every reflective surface lies a kingdom, his kingdom, and if you do not heed the truth he offers you that he will reach out and take you there, never to return.

The next question, and the one most pressing to my own research, is why was knowledge of the Chalk Man lost? Why has he left our collective consciousness? Many of the the legends I’ve found barely describe the Chalk Man whenever they reference him, so sure were they that the reader knew of whom they spoke. So how is it that he is not even a mythological figure today? I do not know, but I expect to find out soon for I think he watches me.

Twice now I have had a glimpse of something else in my mirror. First, I am sure it was his own figure, white and silent, then the second time I saw myself, only with unbroken skin where my mouth should be. After both instances I searched the area for dust, and both times found it.

I have collected the dust and added it to a small vial, to be sent to the university along with this manuscript. I hope to send it this very afternoon. This will of course require me to leave my matte room and pass my own reflection, be it in a window or pool of water. I am ready. I have my questions. If I see him again I will not look away, but will instead ask why he withdrew from our world — as I am sure now the lost knowledge of his person was at his own design — and if he is likely to return. I hope he does, this world could do with a good hard look at itself.

One final note. It occurs to me that perhaps I have been…foolhardy, cataloging this history, if indeed the Chalk Man does want to stay hidden. So if you are reading this, it might be best to steer clear of mirrors for a while. You never know when he might be watching.