When last we spoke I was singing the praises of beautiful Mostar, sharing photos of yours truly smiling behind a giant platter of food, and spinning thoughts on war and kindness.

Let’s get back into it, shall we?

We left Mostar by bus. A risky venture after the questionable success of the last one, and a risk we quickly paid for. We were heading back to Split in Croatia for a second night, and I was looking forward to seeing the city’s sun dabbled shore and discovering more of what hid behind it’s white stone foundations. But I would have to wait somewhat, as about half way through our four hour drive, our bus inexplicably pulled over onto the side of the road, where it would stay for the next two hours. I say inexplicably mostly because I don’t speak Croatian. Neither does Holly, funnily enough, and so we were both left scratching our heads as the driver took the bus in and out of park while slamming on the brake pedal and calling out in Croatian. We managed to get the gist of it; the bus was broken, something to do with the brakes, and we wouldn’t be going anywhere for awhile. We weren’t too bothered, we didn’t have a schedule to keep, we had snacks in our bags (always have travel snacks), the view from our breakdown spot was incredibly beautiful, and our kindles were charged and full of books. Even if a replacement bus didn’t come for the next day, we’d be fine. Some of our fellow passengers, however, weren’t so lucky. Two ladies, not travelling together, both started…how to put it?…freaking out. They had planes to catch and had not budgeted in time for their bus to break down on the side of a highway. One of the other passengers, a middle aged woman who clearly liked to take charge in situations she shouldn’t be taking charge of, marched down the bus and told them it was alright, she had a solution. They would pray. My eyebrows rose at hearing this, but rose higher when one of the women agreed. The other one responded more akin to my own thoughts, “or we could call for a replacement bus.” They ended up doing both. Not that either woman would see the replacement bus. They managed to score themselves a lift from a passing good Samaritan. Divine intervention? We’ll never know.

Split, as suggested earlier, is a coastal town, as much of Croatia is. Old world Mediterranean architecture rubs shoulders with startling blue ocean water, and holds port to a large number of skiffs, sail boats, and cruise ships. The center of Split is Diocletian’s Palace, an ancient roman building that more resembles a large fortress that a traditional palace. It was built at the turn of the fourth century AD, and has had quite a history since that time, with many conquerors moving in and out as the years passed. Today it is home to the city’s interior with twisting passage ways and shopfronts sprawling out from it like ink leaking through water. Rich white buildings and pillars, courtyards and underground passages, are now home to shops and cafes, gorgeous places to sit and drink a cup of strong coffee, or browse the many delicious food options available. I was very taken with it, but we didn’t have too much time to explore because, on a whim, we had booked ourselves on a sunset cruise.

With the sun setting we drank beer, ate canapes, and listened to music from the boats resident band. We felt fancy and exhilarated, and, later, drunk; having taken advantage of the endless alcohol a little too hard. Still, it was a beautiful night, spent beside my favourite person. Split had impressed, leaving us with the vow to hopefully return one day and see what else Croatia had to offer. 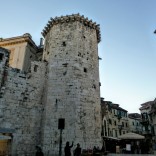 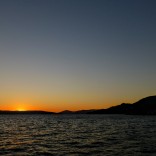 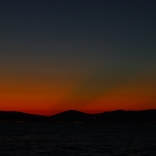 Next it was onto Prague, aka, my new all-time favourite city. I don’t say that lightly either, by the way. I’ve been lucky enough to visit many amazing cities in the past three months, but Prague…Prague was something else.

Part of it was the history, which is long, and terrible, and fascinating. Part of it is the beer, which is hoppy, and varied, and delicious. Part of it was the chimney cakes, which, well, look them up and you’ll see. But mostly it was the grandness of the city itself. The way every turn of every corner found some new architectural delight. How the streetlamps glowed. How the cobbles gleamed against their light. How if I squinted my eyes only a little I could swear I had walked into a city of wood and stone previously only found in the high fantasy books I grew up on. That was the most thrilling part of it all. When I read those books and heard about these grand old cities full of towers and turrets, ale and aged meats, manors and magic, I dreamed of walking through their streets. I thought this was only possible in the pages of books written by imaginative women and men, but in Prague, I lived this dream. The book obsessed teenager in me rippled to the surface and practically squealed as he walked across Charles Bridge, grinned madly at the aged Gothic statues dotting its surface, and took photo after photo of the sprawling, magisterial castle that overlooked it all. I’ve been lucky enough to have visited a number of medieval cities in my time, but none of them came close to living my fantasy the way Prague did.

I liked it, in case that wasn’t clear.

I immediately messaged Brother Jonathan, who had already been here himself, to madly share my gushing of the fact that I was in a city from the books we loved so much. I don’t remember his response but no doubt it was more subdued than the drunk-on-happiness text I’d sent him.

The next day we were already penciled in to do a walking tour of the city, needless to say I was very excited. The tour was ran by an affable North American man who had also come to the city because of love, both of the city and his now wife who was born in a town not far from Prague. This love of his (for the city, not his wife) was infectious and if I hadn’t already been spellbound by Prague at the start of his tour I would have been by the end.

From there there’s not too much more to say. We spent the rest of that day exploring it as best we could in our given time, grazing our way through as much food and drink as our stomachs would allow, and repeatedly declaring that next time we came back to Europe we would see more of Prague and more of the Czech Republic. I have no doubt it still has other hidden treasures to discover. 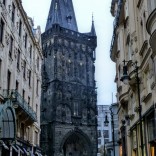 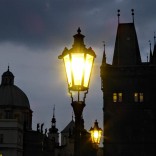 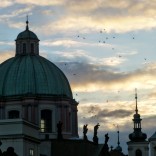 The magic of travel is that I get to visit worlds unknown to me. Yes, they may be my world, they may be the planet I’m already familiar with, but until I rocked my way over Croatia’s water, and strolled through Prague’s impressive streets, they didn’t exist to me. Not really.

Now they do, and what a wonderful, magical, and beneficial thing that is.